May 2017 Music
May 31, 2017 by Silence
Silence Presents: Moonfruits and Georgian Bay 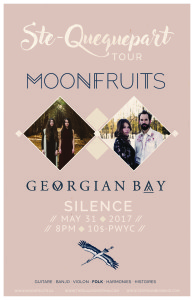 Escorted by a variety of stringed instruments and soaring harmonies, bilingual duos Moonfruits and Georgian Bay tour New-Brunswick, Québec and Ontario this summer in support of Moonfruits’ May 2017 release Ste-Quequepart and Georgian Bay’s 2016 Polaris Prize nominated album Patience. Spinning tales of Canadian mysticism where ideals and imagination intertwine, these longtime friends and collaborators invite you into their world to discover the wilderness of Georgian Bay’s shores and the stories of imaginary maritime village Ste-Quequepart. Moonfruits Escorted by a banjo and a parlour guitar, Moonfruits’ soaring harmonies captivate listeners and celebrate common ground. Partners on and off stage, they summon music from a place where ideals and imagination intertwine.

Artists as Activists: Turkwaz and Nauroz Tanya
Saturday, May 27, 2017 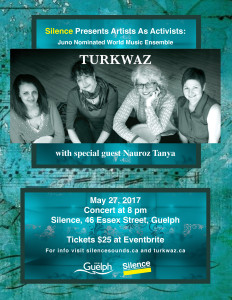 Turkwaz is a unique combination of four musician/singers, immersed in diverse traditions from mysterious Sufi devotional love songs, to rousing Thracian dance music. Each performer brings a special flavour to the group. Maryem Hassan Tollar draws on her Arabic language heritage, Jayne Brown and Sophia Grigoriadis bring their experience with Greek music to the mix and Brenna MacCrimmon adds her Turkish fascination. They have a long-standing collective interest in Balkan traditions and add Albanian, Bulgarian and Macedonian and whatever else strikes their fancy to their repertoire. The love and respect they have for the traditions they draw from are clear but they are not afraid to arrange the tunes in new and unexpected ways to give them a fresh spin.

Nauroz Tanya is a Kurdish-Canadian composer who began music lessons at the age of six. His father was one of the pioneers in the theater and early television revolution, and through him, Nauroz developed a great interest in music and art.After completing a degree in music, Nauroz composed music for chamber ensembles, performed in piano solos, orchestras, and short and full-length movies showcased in Europe, Australia, US, and Canada. He wrote music for media and television in France, Germany, and Sweden where he lived for several years and attended the Academy of Music and Drama in Gothenburg. 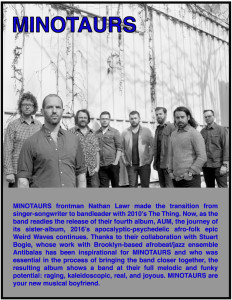 MINOTAURS frontman Nathan Lawr made the transition from singer-songwriter to bandleader with 2010’s The Thing. Now, as the band readies the release of their fourth album, AUM, the journey of its sister-album, 2016’s apocalyptic-psychedelic afro-folk epic Weird Waves continues. Thanks to their collaboration with Stuart Bogie, whose work with Brooklyn-based afrobeat/jazz ensemble Antibalas has been inspirational for MINOTAURS and who was essential in the process of bringing the band closer together, the resulting album shows a band at their full melodic and funky potential: raging, kaleidoscopic, real, and joyous. MINOTAURS are your new musical boyfriend. 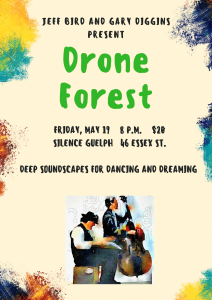 Dance or dream. Get lost in sound.

Silence Presents: Eamon McGrath and Wilderness of Manitoba
May 18, 2017

Eamon McGrath is on an extended Canadian / European tour to promote the upcoming release of his book Berlin – Warszaw Express!(ECW Press) The book fictionalizes experiences from his life and the lives of his peers to seek out meaning and significance in the tumultuous and emotional experience of living on the road. McGrath will be accompanying readings from the novel with a few tunes from his brilliant, extensive catalog.

Since its inception The Wilderness Of Manitoba has continued to grow and evolve with every new release. Throughout it all founding member Will Whitwham has left his imprint on each and every sound the band has produced. Wilderness of Manitoba are on tour to promote their new release, The Tin Shop EP, Whitwham is joined by vocalist/guitarist Raven Shields on this tour for a more stripped down, anthemic folk rock feel to reveal the true heart of Whitwham’s songwriting. 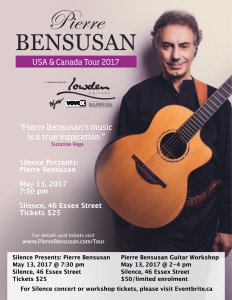 “Bensusan is very much his own animal. It’s like listening to a butterfly, to dappled sunshine coming through quaking aspens. His music flits and darts around like fish in a pool. And his compositions manage to encompass both the calmness of the pool and the flashing of the fish. It’s an entrancing, almost hypnotic thing to watch and hear, as he seems eager to share his journey, his light. I was struck by how the aim of each song was to be beautiful. Not witty, not avant-garde, not new, necessarily, but beautiful. A great craftsman plying his trade. A shepherd with his flock. As I left I felt all of a sudden that I’d been to temple after all. My own sort of temple, and by the end of the service I felt purified, cleansed, and ready for the new year.” 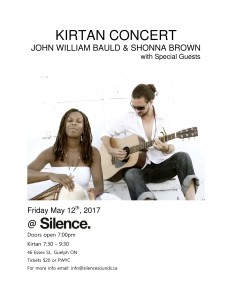 John William Bauld, Shonna Annapurna Brown and friends will take you on a journey of love and discovery through devotional sounds of kirtan and meditation. Teachers of Yoga – Acharyas (M.Y.) John William Bauld & Shonna Annapurna Brown travel abroad teaching classical yoga and spreading the love that they hold in their heart for Bhakti music. The debut solo album produced in California by acclaimed Grammy-nominated Ben Leinbach mixes sacred Sanskrit mantra with modern adult contemporary music in English, with the single Nataraja, featured on Kripalu’s latest Seva CD ‘Sounds of Bhakti – Vol 7’. They are the founders of Anandafest which continues their commitment to promoting unity and oneness among all people. 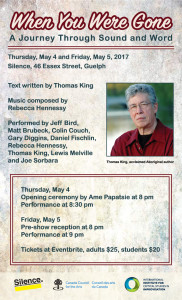 Silence is pleased to announce an exciting and unique event: When You Were Gone: A Journey Through Sound and Word featuring previously unpublished poems and lyrics by award winning Aboriginal author Thomas King in musical dialogue with composer Rebecca Hennessy, joined by the amazing Silence Collective of improvising performers Jeff Bird, Matt Brubeck, Colin Couch, Gary Diggins, Daniel Fischlin, Lewis Melville and Joe Sorbara. There will be two performances: Thursday, May 4 with an opening ceremony by Inuit artist, musician, filmmaker Ame Papatsie at 8:00 pm, and performance at 8:30 pm, and on Friday, May 5 with a pre-show reception at 8:00 pm and performance at 9 pm. Tickets are available at Eventbrite, adults $25, students $20. Signed prints of Thomas King’s unpublished poems will be available at the events. This show is funded by Canada Council for the Arts and sponsored by the International Institute for Critical Studies in Improvisation.