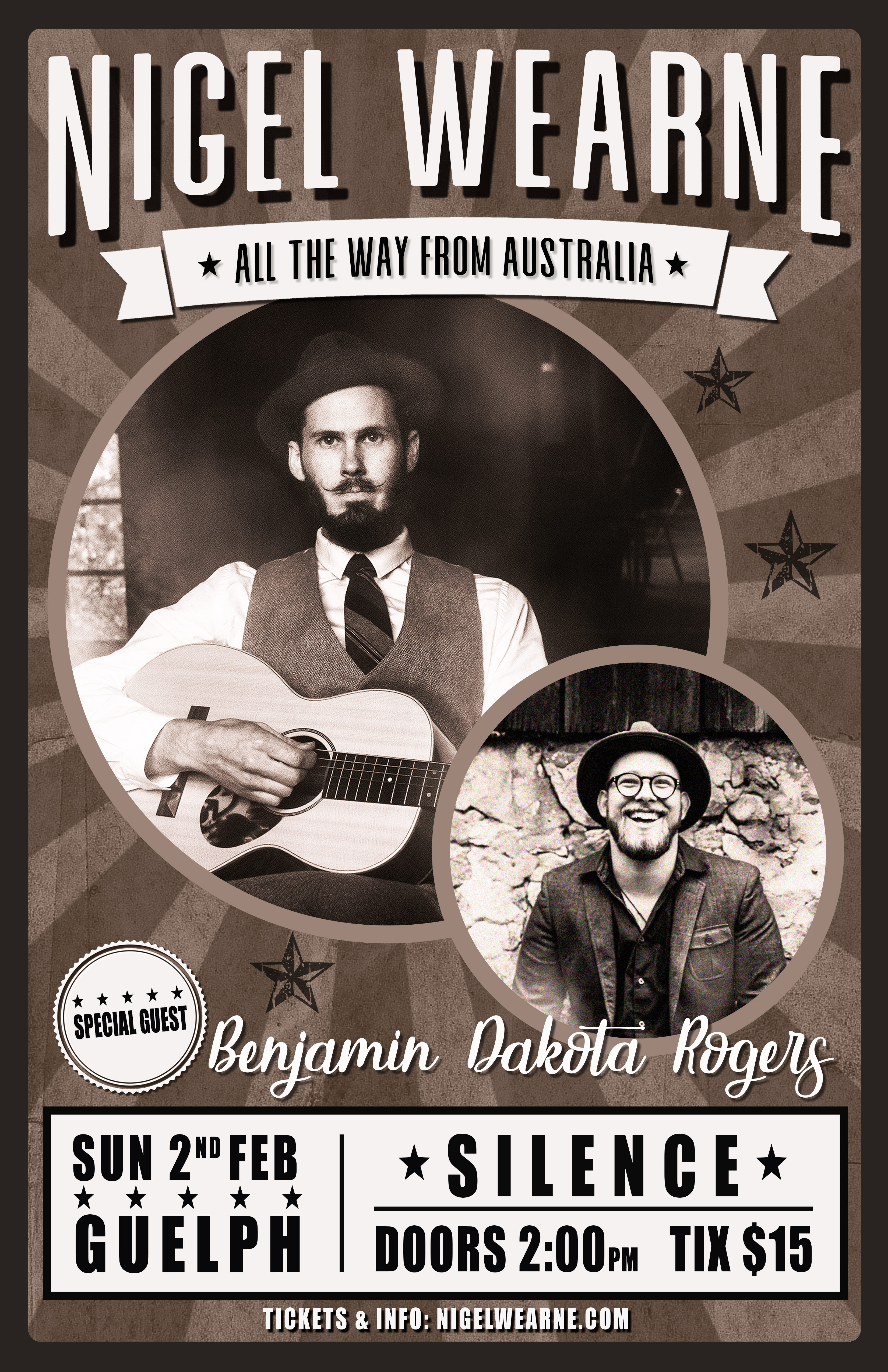 Almost a decade ago, he spent 3 months travelling across Canada from west to east. From the Rocky Mountains, to the mosaic of Montréal and back to the graffiti adorned streets of Toronto, it was a trip marked with poetic meanderings and self-discovery. By the time he got to Halifax he had a bag of new songs that became his 2012 album ‘Black Crow’. ‘Black Crow’ garnered wide critical acclaim including a 4 star review in Rolling Stone Magazine, a nomination for Best Country Album at The Age Music Victoria Awards and it debuted at #1 on the AMRAP Great Southern Charts.

Returning to Canada in 2019, Nigel was an Official Showcase Artist at Folk Alliance International in Montreal. He experienced his first ‘true’ winter and his love for Canada was reignited. In September, he returned once again to play the Troubadour Festival and to showcase at Folk Music Ontario. February marks his 3rd Canadian tour in 12 months and the Great White North is fast becoming his home away from home.

Wearne’s current album ‘Drawing Circles’ is a solo record that’s raw, compelling and reflective. With songs born of shadows and lucid reveries, the 14-song double album explores the dark corners of creativity and the irregular swells of life. A storyteller at heart, he paints lyrical pictures with “the narrative-fuelled prose of Paul Kelly” – Beat Magazine. “One of Australia’s emerging songwriters” – Tone Deaf. “Warmth flecked with grit…beauty awaits” 4 Stars – Rolling Stone.

Hailing from the countryside of rural Ontario, Benjamin funnels his penchant for starry nights and nostalgia into his stylized folk sound, reaching far beyond to include influences of roots, blues and country music.

Benjamin found a passion and purpose in folk music after inheriting his Great-Grandfather’s violin at the tender age of seven. From budding musician to awe inspiring performer, his love of creating meaningful music has taken the reins and garnered much attention from folk artists and enthusiasts alike. “Rogers’ unique voice, thought-provoking lyrics, energetic performances and dynamic fiddle techniques leave this up-and-coming musician in a class of his own.” – InSpades Magazine.