James Gordon and Jeff Bird: 40 Years Down In The Folk Mines
Sunday November 26, 2017 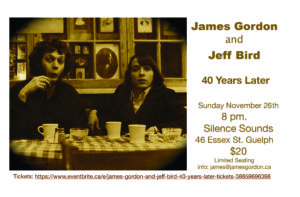 Yes, it was 40 years ago that two young U of G students met in the Carden Street Cafe, (which James happened to own )- and they started a musical friendship that has endured. They played as a duo for a year, then with Randy Sutherland formed Tamarack. Jeff left that band to join Cowboy Junkies, which is still going strong, and he’s played on many of James’ solo projects over the years. This anniversary concert will feature music that spans their entire musical journey together, along with road stories, surprises, and a stage-full of instruments. This promises to be a memorable evening!

Onion Honey makes folk music, sharp and sweet and mixed in are banjo and mandolin, washboard and double bass, fiddle and warm three-part harmonies. It’s a recipe for a great time and good for what ails, home-cooked comfort food for the ears. Dave Pike, Esther Wheaton, Keenan Reimer-Watts, Leanne Swantko and Stuart Cybulskie play new-time traditional and old-time originals and all-time favourites: mountain music as heard from the Grand River Valley. They have performed in dingy pubs and sunny cafés, folk festivals and country weddings, small-town castles and downtown galleries, and once a hot air balloon festival.

Toronto-based singer-songwriter and fingerstyle guitarist Shawna Caspi hadn’t done much travelling before tapering off a series of administrative jobs to start touring full-time. She had never even rented a car. She had never been camping before performing at the Blue Skies Music Festival in 2014. 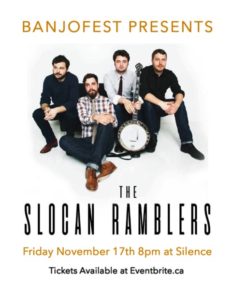 Banjofest is presenting their first stand alone concert and it’s with one of Canada’s finest bluegrass bands- The Slocan Ramblers. These guys regularly tour Canada and the US and have even opened for Steve Martin! The date is Friday November 17th. at Silence. The Banjo Mechanics will be the opening act. 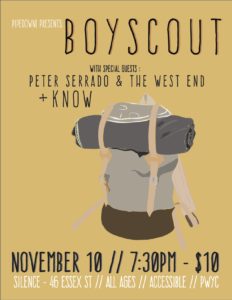 Boyscout with Peter Serrano & The West Winds, and Know

MiniFest with Ian Reid, David Lum and Outside The Box
Saturday November 4, 2017 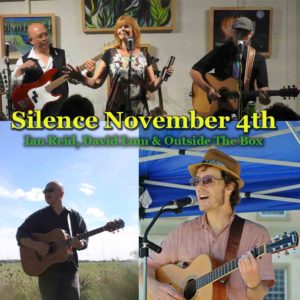 Ian Reid’s unique songwriting style, warmth and humour continues to delight audiences everywhere. Living in small town Ontario with all it’s foibles infects his delightful tunes and can’t help but put a smile on your face.

Multi-instrumentalist David Lum found his way to Ontario from Vancouver via Winnipeg. Along with his exceptional guitar skills, magical songwriting and smooth vocal stylings, it’s impossible not to fall in love with his music.

Outside The Box consists of singer songwriter Peter Light, violist/vocalist Gwen Potter and bassist/guitarist David Lum (yes, the same David). Peter’s latest CD has been getting airplay on CBC as well as local radio. Be prepared, you never know what to expect from this eclectic trio. One minute a wee celtic tune, jazzy pop or perhaps an indie folk number. They’ll keep you on your musical toes.

The Universe Featuring Ray is the soul creation of Ray Stern, who combines her art and music to produce a one-girl, one-of-a-kind live theatrical performance. The stage set up is equipped with multimedia art and stage props and Ray performs using a wireless head mic allowing her to move across the stage and bring life to each part of the dynamic music experience. Rays songs are clever and edgy but still have an underlying message of positivity and love. The wild energy and utter freedom Ray expresses is mesmerizing and will make you laugh, possibly cry and you will definitely have her tunes in your head on repeat, days after you catch the show.

Next article Daniel Champagne in concert February 1 at Silence