Prelude to a Disaster
January 7, 2020 by Silence 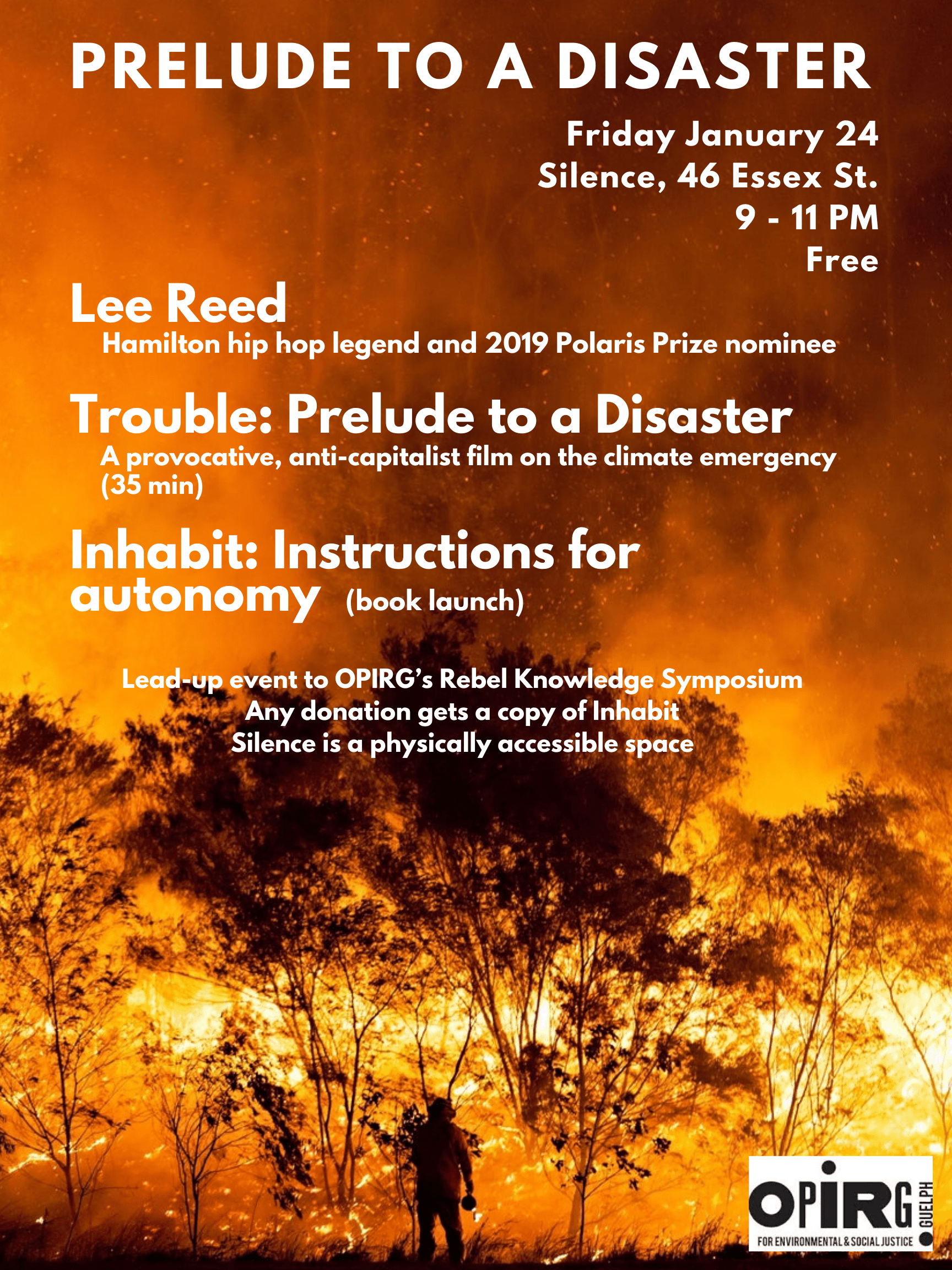 It is clearer than ever that our planet is in an emergency. In this time of refugee crises, rising coastlines and apocalyptic fires, OPIRG-Guelph is hosting an event to strengthen our collective consciousness and stoke the fires of courage and clarity needed to protect the planet.

On Friday January 24 at Silence, 46 Essex St., notable Canadian hip hop artist Lee Reed is playing a free show in Guelph. Hosted by OPIRG-Guelph as a lead-up to the organization’s annual Rebel Knowledge Symposium, the event also features a short film screening of Trouble: Prelude to a Disaster, and a book launch of Inhabit: Instructions for autonomy.

The event kicks off with a screening of Trouble: Prelude to a Disaster, a short, provocative anti-capitalist film on the climate emergency. Trouble is produced by subMedia, a grassroots media collective which aids social struggles through the dissemination of radical films and videos.

Inhabit: Instructions for Autonomy is a collectively and anonymously written strategy from a network of autonomous projects across North America. The pocket-size book brings together diverse strands of thinking, activism, and hands-on experimentation into a radical vision for our tumultuous times. Any donation to the event gets you a copy of Inhabit.

Lee Reed is Canadian hip hop’s oldest and grumpiest radical left loudmouth, and a respected veteran of the nation’s indie music scene. From mouthpiece for the legendary punk-hop greats Warsawpack and throughout his solo work that followed, Reed’s musical legacy remains committed to the fight for a better world: voicing anti-oppressive, anti-capitalist politics through Hip-Hop, and sound-tracking and signal-boosting the efforts of communities and organizers struggling on the frontline for social and environmental justice.  A 2019 Polaris Prize nominee, and a proud new member of the Strange Famous label roster, Reed shows no signs of slowing down in his old age, as he continues to create some of the most relevant ‘revolutionary’ hip hop this side of 1989.