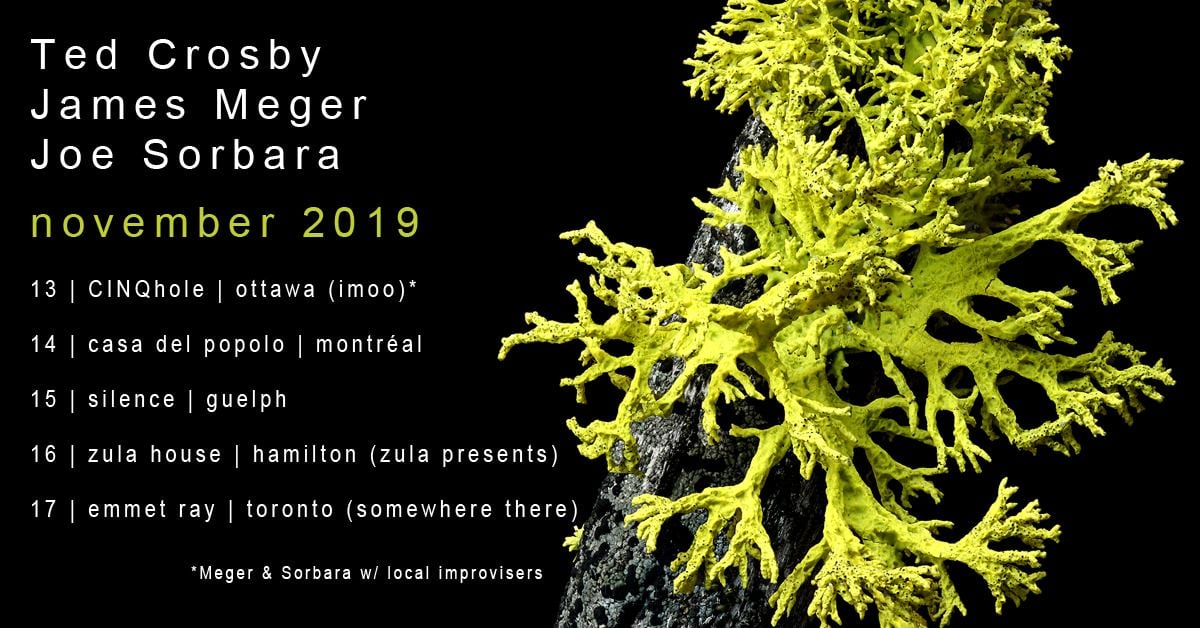 In mid-November, 2019, Vancouver bassist James Meger will fly east to join Toronto-based musicians Ted Crosby (tenor saxophone, clarinet) and Joe Sorbara (drums, percussion) on an excursion from Montréal through Guelph, Hamilton, and Toronto to share their joy for creative music with the musically curious along the way. They will play one another’s original music along with excursions into the influential work of Ornette Coleman, Paul Motian, and Thelonious Monk.

Ted Crosby was born in rural Vermont, USA and is a multi instrumentalist specializing in tenor saxophone, clarinet, and bass clarinet. He moved to Montréal to study music at McGill University and lived and worked there for ten years. He recently relocated to Toronto where he is becoming active on the jazz, improv, and folk scenes. His band Nomad performs regularly throughout Canada and has released two full length albums to date. In 2018, Ted composed for and directed Revival Ensemble, a large group project based on the music of Duke Ellington, featuring a varied cast of Canadian improvisers such as Brad Turner, Josh Zubot, Ron Samworth, and Lina Allemano. Ted is equally interested in jazz, avant garde, and popular music styles. He has collaborated with songwriters like Leif Vollebekk, Sam Tudor, and Isla Craig; worked with improvisers like Peggy Lee, Lori Freedman, Dylan Van Der Schyff, and Karen Ng; and performed with jazz musicians like Michel Lambert, Andre White, Kevin Turcotte, Pablo Held, and Tommy Crane. He has performed at small festivals such as L’Off Festival (Montreal), IMOO (Ottawa), Something Else! (Hamilton) and Tone (Toronto) as well as major international jazz festivals in Montreal, Toronto, and Vancouver.
tedcrosbymusic.wordpress.com
nomadmusic.ca

James Meger is an active bassist and composer currently working and residing in Vancouver. He studied at Capilano College in Vancouver and then at Mcgill University in Montréal where he received a bachelor’s degree in Jazz performance. Since moving back to Vancouver he has become the city’s most in-demand bassist and has had the opportunity to collaborate with many local and international players such as Wayne Horvitz, Lori Freedman, Ig Henneman, Lina Allemano, Peggy Lee, Brad Turner, and Lisa Miller, among others, and has made many appearances at The Vancouver Jazz Festival, The Suoni Per Il Popolo Festival, Tone Fest in Toronto, and The Vancouver Improvised Music Meeting. He is also active as a sideman and co-leader in various ongoing projects, including Peggy Lee’s Echo Painting, Sick Boss, The Alicia Hansen Band, The Bruno Hubert Trio, The Now Orchestra, Elisa Thorn’s HUE, Cow Trance, The Sumner Brothers, and many more. Recently James spent several months in the Netherlands studying with renowned improvisor Wilbert de Joode thanks to an Early Career Development grant from the BC Arts Council. He also co-curates a weekly interdisciplinary performance series at the Gold Saucer Studio in Vancouver called Sawdust Collector.

Canadian drummer and percussionist Joe Sorbara has spent nearly two decades developing a reputation as an imaginative and dedicated performer, composer, improviser, organizer, and educator in and around his home in Toronto, Canada. Sorbara is a highly inventive musician who has played and recorded with the AIMToronto Orchestra, Ken Aldcroft, Jared Burrows, Anthony Braxton, François Houle, James Meger, Evan Parker, Allen Ravenstine, Clyde Reed, and Friendly Rich as well as many of his own unique projects. He is equally comfortable playing jazz, free improvised music, indie rock, and chamber music; but is most at home when playing them all at the same time. Sorbara holds an Honours Bachelor of Fine Arts in Music from York University and a Master’s degree in English from the University of Guelph where he focused on critical improvisation studies, literary and cultural theory, and pedagogy. Joe has worked extensively as a workshop facilitator and guest lecturer and he taught Creative Music performance and drum set studies for twelve years in the Music Department at the University of Guelph.
ovalwindowmusic.org