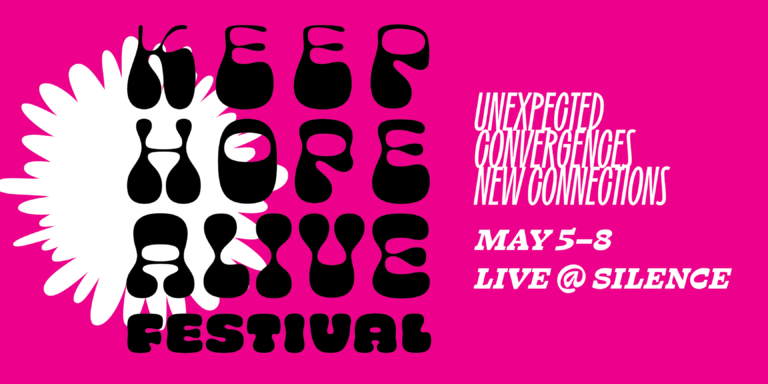 An evening of intimate duos featuring exceptional instrumentalists in unusual combinations. Master of the shakuhachi, Gerard Yun, and electronics wizard Jim Harley begin the festival with an invitation into deep listening spaces.

And long-time Silence friends—and extremely tall people—Kevin Breit and Matt Brubeck go way low in this unusual dialogue between bass family members who rarely, if ever, have a sit-down.

Conversations in the Key of Be (Who You Are)

An evening devoted to unexpected convergences and sonorities. Dialogues between decolonizing texts and improvising musicians featuring the words and voices of two gifted writers, Tom King and Rinaldo Walcott.

77 Fragments of a Familiar Ruin

Wellington Brewery Beer Tent Hang with food and featuring the infectious sounds of Guelph’s own The Social Committee buskers.

Feedback Loop, a two-month long exhibition hosted at Silence, created by students from the International Institute for Critical Studies in Improvisation with designs by Lucy Bilson, an experimental film by Nick Fraser, and evocative soundscape by Ensemble ReSauvage (Fischlin / Melville / Noblet) will be open for viewing indoors.

An intimate encounter with one of Canada’s most original voices on the piano in dialogue with readings from his book Music Lessons (ECW 2020).

“Music Lessons is funny, tender and at times profound. It is a brilliant and unusual memoir of a life dedicated to music told by a silver-tongued storyteller.”

― Scott Thompson of The Kids in the Hall

A Glimpse of What’s Beautiful

Named in celebration of the great William Parker, this newly formed improvising quintet comes together in search of a “glimpse.”

Three of the most extraordinary voices in Canada come together in an exploration of sound and story, of the joyfully bizarre and weirdly wonderful human voice. Along for the ride: a playful friend to tap, knock, scrape, and smash out some support.

A long-awaited replay of the Canada Council project recorded, but never performed live, by the Silence Collective during the pandemic. RiverChants aims to deepen our understanding of the plight of water as well as to celebrate the sinuous waterways that surround and shape the city of Guelph.

“RiverChants is a beautiful multi-disciplinary piece in the most unconventional sense. Avant-garde, textural, jarring. Criss-crossing mediums with aplomb. This is by no means an easy listen. The album challenges every facet of your listening muscles. But in that challenge is a great reward. The chaos of a roaring rapid spilling into the most pristine, still mountain lake. A living breathing personification of the music of the natural world in all its wild entropic glory.”

“The Silence Collective is an ensemble of improvisational musicians that have toured and recorded extensively together. With poetry, music, ambient noise, the sounds of the world all around us, “RiverChants” feels like the universe tuning up before something magical happens.”